Until now, I thought PVLANs were a bit  difficult to understand and to implement, like when studying to CCNP that took me a while to digest, and I had some doubts about it, till today! Man... how simple it is, and there´s no much "magic" in that (like our friend Scott Morris usually says)!  Pretty straight-forward and no big deals! The Security Video from IPExpert is AWESOME. It´s short, informative, to the point, and solved MANY questions I´ve for a while in minutes! Man! What a nice way to do it!

So, let´s get into that:

There are tree type of Private VLANs Ports:

To have PVLANs configure the Switch MUST be in Transparent VTP mode, otherwise, it´ll not work.

Just keep in mind that when you configure your switch to VTP Transparent mode, you do not loose what you´ve learned so far, you´re just not gaining anything new about the changes from now on!

Hosts in different PVLANs are all in the same IP Subnet, BUT, they´re not able to talk to others in different community or isolated VLANs! That´s the main goal of a PVLAN, to split the VLAN domain into multiple isolated broadcast subdomains. But if one Community VLAN needs to talk to other Community VLAN?! Well... that can be done through a Router or L3 Switch. Also, you can apply some access-lists and other security features to permit only the things you want to pass through!

The best way to explain this is using an example, so check our topology, we´ll concentrate on the PVLAN ports: 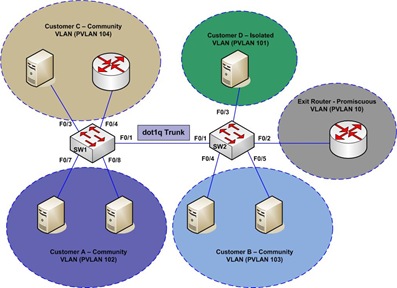 First, lets go ahead and create our VLANs:

Now, we´ll associate each port to it´s VLAN, check it out:

So, what can be connected in the Promiscuous VLAN?! Normally the devices that are common to everybody, and needs to talk to all VLANs, like Routers, DNS Servers, NTP Servers, DHCP Servers, and many others!

You can verify your configuration using the "show vlan" command. The info regarding PVLANs will be at the end of the output of this command.

A good advice from the IPExpert Video is that the current IOS on the LAB (12.2.25) doesn´t allow us to use switchport port-security commands and private-vlans  at the same port at the same time!  Once it hits a newer version (12.2.40) (that can happen anyday Cisco wants) we´ll be able to do that!

Ok! But... do you know that 3550 doesn´t support PVLANs?! Yep.., me neither! They´ve a feature named Switchport Protected for that, it´s really simple, and for example, if we have 15 devices in a vlan, but, only two of them are protected (with the interface command switchport protected), they can talk to everybody else, but not to each other!

Not that difficult, right?!

There are many other AWESOME PVLAN articles in other blogs!

Scott is the man! Those videos rocks!

Nice write-up! I felt the exact same way...when first seeing this topic for CCNP and such, it made me fear it...but after watching the same video, I feel much more comfortable actually understanding the theory.

What really helped for me was seeing it actually configured, that goes a long way. Nice article!

Hey Joe! How are you buddy?!

Yeah! I think you know exactly what I mean! Back on CCNA/CCNP, there are some topics that confuses us more than it helps! Maybe the way used to explain things or maybe the examples, I don´t know.

I know that till now I was kind affraid of PVLANs, but not anymore... Actually it´s really simple! I just don´t get "WHY" I was so confused till now! Anyway! Glad you like it! It´s pretty much what was covered on the video, plus some examples!

Really?! Have you seen any real network using it?! I´ve never saw! Only on lab!

WoW shares many wow gold of its features with previously launched games. Essentially, you battle with wow gold cheap monsters and traverse the countryside, by yourself or as a buy cheap wow gold team, find challenging tasks, and go on to higher aoc gold levels as you gain skill and experience. In the course of your journey, you will be gaining new powers that are increased as your skill rating goes up. All the same, in terms of its features and quality, that is a ture stroy for this.WoW is far ahead of all other games of the genre the wow power leveling game undoubtedly is in a league of its own and cheapest wow gold playing it is another experience altogether.

Even though WoW is a Cheap Wow Gold rather complicated game, the controls and interface are done in warhammer gold such a way that you don't feel the complexity. A good feature of the game is that it buy wow items does not put off people with lengthy manuals. The instructions bygamer cannot be simpler and the pop up tips can help you start playing the game World Of Warcraft Gold immediately. If on the other hand, you need a detailed manual, the instructions are there for you to access. Buy wow gold in this site,good for you, BUY WOW GOLD.